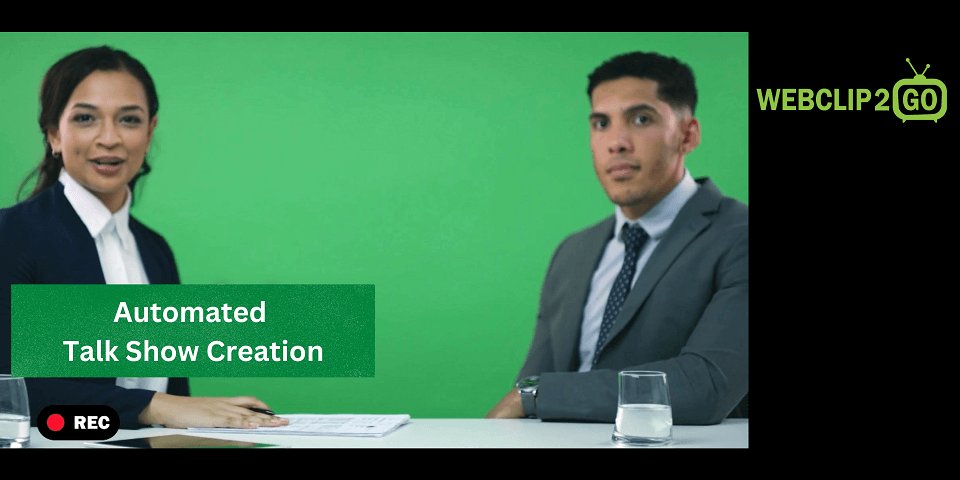 System can be used to create live panel shows, interviews and webinars

WebClip2Go today announces the launch of its Automated Chat Show function, an expansion of the wider WebClip2Go video production system, which puts professional-grade video production capabilities in the hands of everyday users. On top of its PowerPoint-driven production system, which allows for more traditional ‘talking head’ videos to be created, WebClip2Go has for many years also offered a LiveSwitching add-on, which allows presenters to engage in dynamic, unscripted switching between cameras, to add titles and transitions as desired. With this, presenters used a discreet button panel to make switching choices as they present. However, with the new Automated Chat Show function, the responsibility for switching becomes entirely automated, leaving the presenter hands free and able to devote their full attention to delivering content to camera.

Making use of AI and voice activation technology, the Automated Chat Show function reacts to who is talking, switching camera or shot type as required. However, it goes far beyond mere reactivity, which in isolation would produce monotonous and clearly artificial results. Instead, the AI system allows for a range of programmable parameters to be set which create a more fluid, dynamic production. Thus, the camera does not merely linger on whoever is speaking, but can be programmed to engage in switching according to certain rules; such as an ‘impartiality’ rule to ensure no one speaker dominates, or a ‘randomised’ function which cuts away for reaction shots, and can be set to different time parameters in order to set the pacing of the production. Titles and relevant graphics can also be pre-programmed for insertion.

The net result is the ability to generate a full chat show without any crew at all, and with no need for post-production editing. This continues the philosophy of the WebClip2Go system as a whole, which has been designed from Day One to turn the video creation process on its head by simplifying editing steps and moving them to the front of the workflow. In the ‘basic’ version of WebClip2Go, this is applied only to ‘talking head/delivery-to-camera’ productions in front of a green screen (such as those associated with the weather, or the presentation of educational content). Under this traditional WebClip2Go setup, users can ‘pre-create’ scenes in which all of the graphics, titles, effects and transitions have already been set. Through this, the presenter is able to follow a script and deliver directly to camera in one shot, with the output rendered immediately.  The original WebClip2Go system even allows for these scenes – and the script for the teleprompter – to be created directly through PowerPoint, further enhancing the status of the system as ideal for prospective content creators to deliver professional-grade outputs even with no professional experience.

But the decision of WebClip2Go to focus on enhancing its Chat Show/Interview-based capabilities stems from recognition of the constantly changing video landscape. Maintaining audience interest in an increasingly saturated mediascape means increasing the dynamism and engaging nature of content. Whilst structured and scripted ‘presentation-based’ content retains strong applicability in markets such as education, increasingly audiences seek spontaneous, authentic interactions as their preferred way to access information and entertainment – for instance, in Podcasts, Webinars and online Chat Shows. WebClip2Go builds in all the tools needed to achieve these kinds of productions, with no prior expertise, minimal setup, immediate output and no need for a crew. Any individual or group can create a professional-grade Chat Show in the time it takes to hold a conversation. This has applicability in educational, corporate and even retail settings (with a specific fashion/catwalk orientated automated setup also available), but also increasingly has applicability for amateur content creators who are looking to adopt a more professional and profit-orientated creation mindset.

Speaking of the increasingly automated nature of the WebClip2Go system, CEO Gerrit Bulten said: “Reducing the costs, space and technical requirements traditionally associated with filming and editing has always been our raison d’être. But with more than 25 years in the broadcast industry, we also know how to make content that engages. Through automation, we are able to embed those principles of effective content creation directly into the system – guiding content creators to produce something dynamic, exciting, authentic and entertaining. Coming on the back of our recent ‘knowledge clip’ development, which has been a huge success at a number of tradeshows, we are confident that both existing and prospective users will quickly see the remarkable potential of this new automated Chat Show addition”.