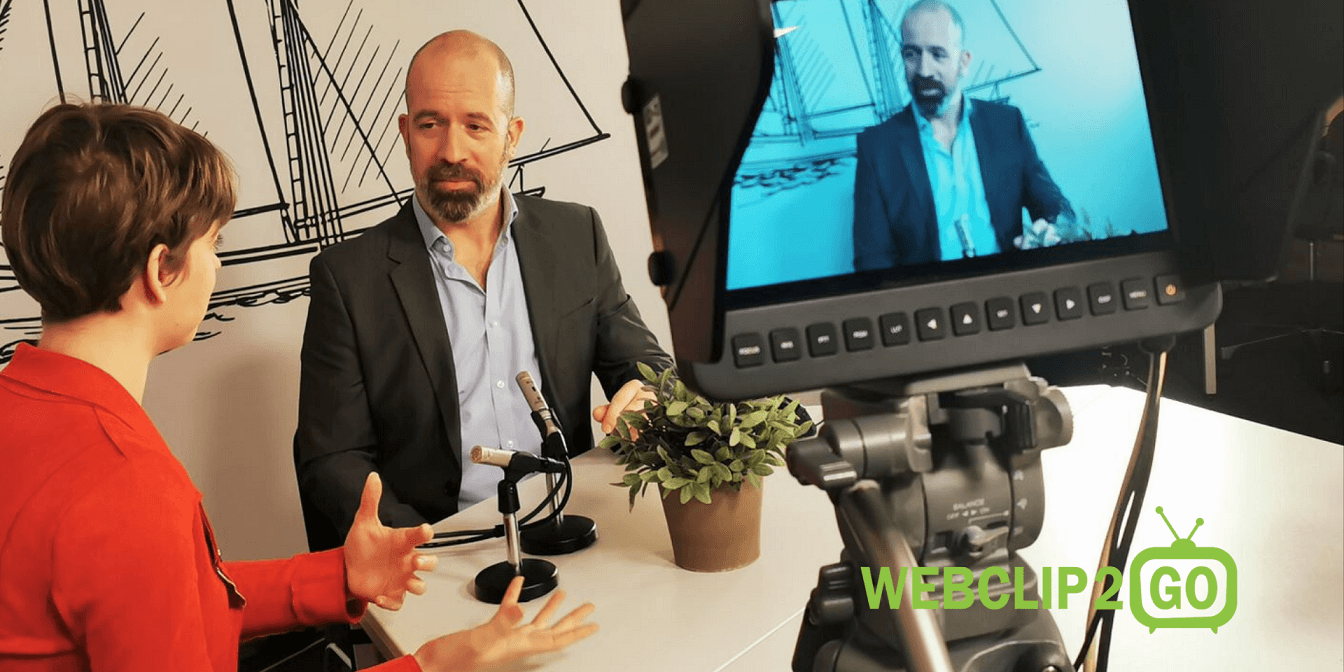 VCP allows for seamless chat show production with no crew

WebClip2Go – creators of a unique new video production system – today announce the integration of their remarkable proprietary AI-based VCT (voice control technology) switching program, which integrates voice activation elements and eliminates the need for a crew when engaging in the production of live chat shows or interviews. The VCP (Voice Controlled Production) new functionality is announced in time for WebClip2Go’s attendance at the Media and Learning Show, hosted in Leuven, Belgium on the 2nd and 3rd of June, where WebClip2Go will be demonstrating how their studio technologies have been implemented at the local university.

The addition of VCP yet further enhances the credentials of the WebClip2Go system as a fully integrated, crewless video system which makes professional-level production available to everyone. The original WebClip2Go format turns the video creation process on its head, simplifying editing components and moving them to the front of the workflow. This involves ‘pre-creating’ scenes – in which all of the graphics, titles, effects and transitions have already been set, allowing a presenter to deliver direct to camera in one shot. These scenes – and the script for the teleprompter – can even be created directly through PowerPoint, so no specialist knowledge is required.

However, for those who are seeking to create a more dynamic production – particularly in contexts with more than one presenter speaking off-script – WebClip2Go has integrated a Live Switching unit, which allows for users to set up their studio space for interviews and render their outputs on-the-fly to be streamed live as required. Previously this was facilitated through the use of a StreamDeck switching unit, which allowed the presenter to configure a multi-button unit with visual digital labels, and undertake the switching process as they presented.

Now though, the addition of the new AI component makes the process of producing webinars, chat shows and interviews even more hands off. At its core it uses voice activated technology, reacting to who is talking and switching cameras or shot types as required. However, unlike other voice-activated systems – which are simplistically reactive and can therefore end up delivering monotonous and obviously artificial results, the WebClip2Go system integrates a number of AI elements which intelligently switch to add dynamism to the production.

Users can therefore pre-set any number of variables to dictate the look and flow of their show: for instance, they are able to set the controls for ‘randomised’ switching after a certain period of time in order to integrate reaction shots, or alternatively implement ‘impartiality’ so that no one speaker dominates the production during a debate or conversation. The program will also introduce titles and transitions as required. By using AI to vary the length and order of the shots, a naturalistic production is realised without any crew at all, and after ‘opening’ the show, the presenter is able to focus exclusively on the task of presenting.

Speaking of the integration, CEO of WebClip2Go Gerrit Bulten said: “”VCP is not uncommon as a tool to assist multi-party productions such as chat shows or interviews. But no other system has integrated it to this degree; allowing a fully crewless, hands off approach to video creation that can be used by anyone, with almost no training needed. Simply set the system and present the show: WebClip2Go does everything else and renders the output in real time”.

He continued: “This technology has immense applicability across a range of contexts – whether it’s corporate organisations looking to position themselves as thought leaders within their industry, or retailers seeking to create greater engagement with their customer base. But we’re particularly excited to show this technology at the Media and Learning exhibition, because we think it has great potential for both students and teachers seeking to broadcast debates and disseminate knowledge to a wider audience base, in a way that is both engaging and professional”.