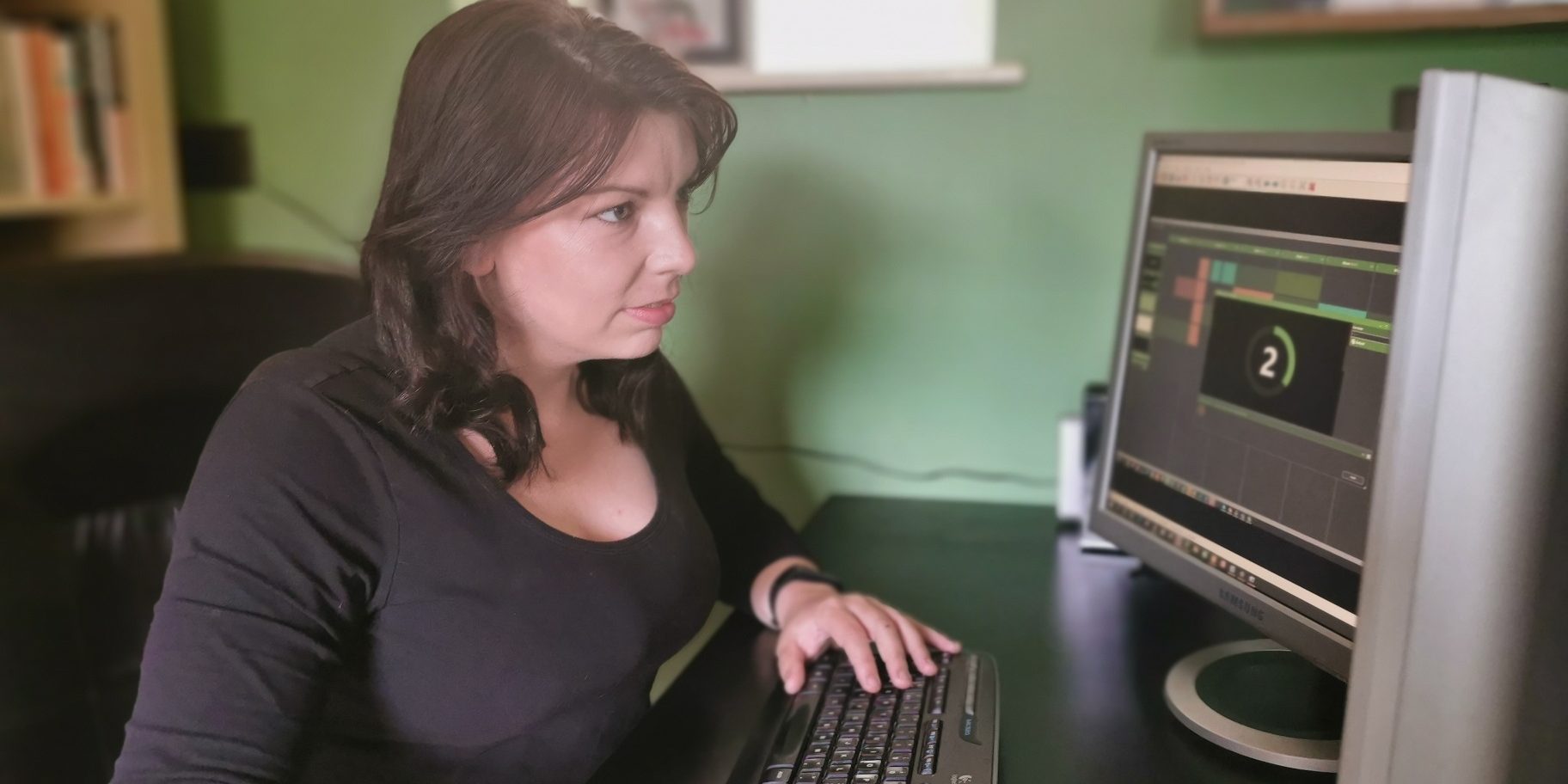 Jess McMurray walks us through a demo at the WebClip2Go offices, and every notion she held on principles of editing is shaken to its core.

Full disclosure: the first thing to be noted is that I work in the field of communications aiming to spread the message about the benefits of WebClip2Go. But the opinions expressed below are my genuine thoughts.

The second thing to disclose is that I am a born-and-bred, die-hard DaVinci Resolve devotee. Until…

When WebClip2Go and Xpresso first entered into talks about a potential business relationship, it was quickly apparent that we would both be a good fit. Through WebClip2Go, Gerrit Bulten was taking his forty years of experience in video production with Burst Video, and developing something completely innovative to the market. It was clear from the way that Gerrit talked about his product that this was potentially a completely revolutionary take on the process of video editing – essentially reversing the workflow and giving non-professional editors access to professional-level editing elements. It quickly became clear that this meant that people who could truly make use of high-level video content – such as university professors – were suddenly being granted access in an affordable and intuitive way.

But I can’t deny, whilst I hugely understood why WebClip2Go was potentially beneficial for a range of people across a range of industries, I still couldn’t quite understand how. I’d seen how immaculate the finished results were, but I couldn’t understand how the editing process worked. After all, I had invested years in learning a non-linear style of video editing that required a certain approach; you take your footage, you sort through it, and you apply (potentially fairly complex) editing elements to it. Effects, transitions, audio elements – these are all introduced post-facto.

And Gerrit was the first to admit that no matter how articulate he was about the WebClip2Go process, nobody really got it until they saw it. So ultimately, there was no choice, I was going to need to bite the bullet to go and see it firsthand: armed with plane ticket and passport, I headed to Stansted airport to make the journey to the Netherlands.

WebClip2Go sells itself on the fact that ‘if you can create a PowerPoint, you can edit a video’. This is absolutely true, but as with many marketing messages, it’s only half the message – and understanding the two halves is key to understanding just how clever the WebClip2Go process is.

WebClip2Go is about the (fairly minimal) investment of upfront time, in order to reduce eventual production time to mere minutes. It’s a two-stage process, with the second part being the particularly clever part that allows non-professionals access to the insanely quick creation of professional-level productions.

In essence, quickly summarized, the WebClip2Go process involves the development firstly of specific ‘templates’. These templates are actually incredibly easy to create, anybody can be trained in the process within a few hours – though a bit of artistic vision doesn’t hurt. With these then created, anybody is able to quickly record and ‘drop in’ their footage to their own particular template in the second stage – and even that capture process is fully guided by the system to ensure that the flow is easy and intuitive. This means that once the templates are set, a single person can produce a full video in roughly 15 minutes. Really – I’ve seen it.

This differs from traditional non-linear editing, in which you’d expect to create the footage first, sift through it, and apply editing techniques afterwards. With the traditional approach, the process requires more than one person (the presenter, the camera operator, and the editor), and requires that at least one of those people has at least semi-professional expertise in editing.

Let me expand a bit on each stage so that you can get a deeper insight.

Stage One – building the templates

It sounds like a cliché, but template building with WebClip2Go makes the complex simple. It is the more labour intensive part of the process, but – approaching it with a basic background in editing – I could pick up the system within an hour or so. Compare that to the endless amounts of time that I have spent getting to grips with DaVinci, let alone mastering it.

Anybody could be up and running and producing templates within, say – three hours. Bear in mind, this could be the person who also eventually shoots videos, or it could be a video manager specifically tasked with template production.

If you’re used to non-linear editing, you’re used to a timeline. WebClip2Go differs in this, because it involves the development of ‘segments’. To me, this involved a screen arrangement that at first felt inverted. But once you understand the process, you understand it’s much quicker to work through. And the logic of this approach quickly becomes apparent when you reach ‘stage two’.

When creating these segments, there really isn’t anything you can’t do, and nothing you can’t control. Effects can be added in their most intuitive form – often requiring little tinkering and therefore expediting the whole editing process. But, if you’re a person who likes control, it’s all there within drop-down menus: transitions, titles, effects, audio, cuts, Chroma keying – all of it can be controlled within the ‘pre’ edit – timing, positioning, shading, graphics, fonts, effects – it’s endless.

Colour correction is even built in – the system takes account of the camera you’ll be using, and – if a colour clipboard is used at the beginning of shooting – the system will instantly colour correct to give a consistent look to every shot. This happens right from the beginning, rather than having to be implemented at the end! And to think of all the time I spent applying LUTs throughout my shots in DaVinci Resolve…

To give you a practical example of how you might be using this, I’ll take an example from the field of academia. I am the ‘video manager’ working within a university. I have professors operating in a variety of fields: Mr. Blue and Ms. Green are both Engineering tutors, Mr. Red is an English Lit tutor, and Mrs. White is a history tutor.

I can create templates for Mr. Blue, Ms. Green, Mr. Red and Mrs. White, based on their aesthetic preferences, their style of video, and the elements they need most frequently. The content of these segments isn’t set yet – that comes in stage two – but the aesthetics of each of these elements is set to give a professional and polished look. The order of the elements within this template isn’t set either – again, this comes in stage two. It’s best to think of this stage as the development of a set of ‘building blocks’, specific to each tutor and ready to be assembled in whatever way the tutor desires.

Stage 2 – Assembling the video, and then shooting it.

You might be thinking that I’ve got the order wrong in the title above. You shoot a video, then you assemble it. Even with the WebClip2Go system now outlined to me clearly, I still have difficulty disassociating myself from the ‘traditional’ approach. But really – in this case, the end user assembles their video first, and then shoots it.

So we’ve established in the section above that a video manager (who might be the final user, but doesn’t have to be) has created the ‘building blocks’ of the video, and these sit on the system ready to be called upon and assembled by the user.

But how is this achieved? How does the user assemble them? More specialize system training for the final user?

Simply by creating PowerPoint slides and naming them appropriately, the final user creates both the content, script and direction for the final film. Each titled slide ‘points to’ the right part of the template and triggers its action, whilst also loading it with the content of that slide. You can even trigger the integration of external videos using an appropriately named PPT slide.

In addition, anything that is placed in the ‘notes’ section of the PowerPoint slide will become the script.

This studio can be set up in relatively small spaces, requiring only the most basic of equipment. None of it is proprietary, so for institutions that already have their own AV equipment stockpile, this can be readily integrated.

The teleprompter runs the programmed template segments, as directed by the PowerPoint file it has been fed. The user has displayed the PowerPoint notes script and when it is time for their segment to be recorded, the script runs on the prompter, and the presenter presents. The process can run from start to finish without interruption, but users also have the option to program pauses, or program in-studio buttons to exercise control over the production process, pausing or re-recording as desired.

What is perhaps most technically impressive is that all of this is integrated into the production and rendered in real time!

The minute you step out of the recording studio, the video is finished – professional, polished, perfect. There’s literally nothing left to do.

The revolutionary approach of the WebClip2GO system should be enough. It truly provides a level of accessibility to professional-level video editing that I couldn’t quite believe (and in all honesty, I was a bit miffed with – what am I going to do with my hours of hard-earned editing experience!?).

But the thing is, WebClip2Go goes even further.

I mentioned above that the PowerPoint notes become a script, and these are delivered to you during the correct part of the filming process through the teleprompter. But the speed at which the script is fed to the presenter is controlled using speech recognition – ensuring that the pacing is maintained perfectly. The process of machine learning means that the accuracy of this process only gets better and better. This is no small deal – even at the highest tier of media production, speech-led teleprompter delivery is still in its infancy.

This script is also directly translated to a .txt file when you upload to your chosen distribution site – for instance, YouTube, which means that both the subtitles and translations generated are completely accurate. And the system also generates automatic thumbnails from your footage, meaning that you don’t have to be burdened with the often mysterious choices provided at random by YouTube.

These are just the beginnings of the functionality that was demonstrated to me during my demo – but the depth of the system is intriguing, whilst still remaining entirely accessible to the non-professional.

Witnessing WebClip2Go left me inspired, and a little deflated. Like the improvement of photo editing software accessible to anyone with a phone, it can leave professionals wondering what value their skills now hold. WebClip2Go genuinely puts professional-level results in the hands of those who don’t have time to learn editing professionally.

That said, there is still value in traditional editing – WebClip2Go occupies a specific segment of the video production market – particularly that based on presenter-to-camera interactions, so the life of the ‘traditional’ editor is not yet dead. Thank goodness (for me!).

But when it comes to fields like education, retail video (especially online retail), and even corporate productions, it becomes quickly apparent to anybody fortunate enough to get a demo that WebClip2Go is about to shake up the system indefinitely. Seeing really is believing.