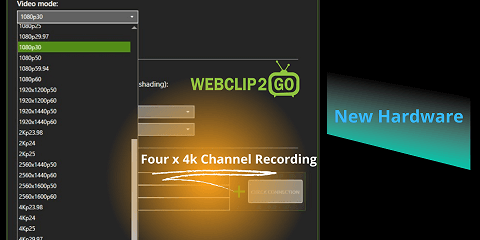 WebClip2Go Beefs Up its Hardware Base

WebClip2Go – an innovative new video production system – today announces that it will introduce a new hardware package which will yet further enhance the functionality of the system and the quality of the video it can output. These hardware enhancements include an upgrade to a CORE i9 CPU and the addition of an NVIDIA RTX series graphics card. These enhancements will allow the system to process and record up to four 4k inputs in order to generate a final composite 4K output. Existing customers who are part of the upgrade and support scheme will be able to have their license moved to the new hardware setup at cost.

WebClip2Go represents a unique piece of software which fundamentally rethinks the way that video production is undertaken, but ships as a full solution, including the hardware upon which the system runs, and the auxiliary components required for customers to setup their own in-house (mini-)studio, complete with lights, cameras, microphones, teleprompter and green screen. The new higher-end hardware offering will see users able to leverage the full potential of the system, which has always maintained resolution independence, but until now has been practically limited by hardware to one 4K input (plus other full HD input channels) when delivering rendered output in real-time.

And it is this real-time rendering which is key to the WebClip2Go proposition. Essentially, with WebClip2Go the workflow process associated with traditional production is reversed. An easy-to-use GUI allows for the creation of professional-level ‘templates’ – including all the transitions, animations, titles, colour grading, sound FX, and animated elements that you would expect. A user can usually get up to speed with the concept after only a few hours of training.

Those seeking to create a video then merely need to load one of these templates and deliver straight to camera. The teleprompter feeds the script and template components to the presenter, who records in real-time and obtains an immediately rendered output. The process completely eliminates the need for a crew, editing, post-production, or time consuming rendering, and can thus be achieved by one person in a matter of minutes.

Moreover, with the addition of complimentary components such as the live switching or PowerPoint modules, non-experts can set up their desired template flow – or trigger it in real-time – with no system expertise needed. WebClip2Go thus democratizes video production, putting the ability to create professional grade video in the hands of a whole host of industry sectors and markets who would normally find the costs and expense of traditional video production entirely prohibitive. WebClip2Go’s predominant customer-based has mainly been that of education providers, online retail and corporate organisations seeking to diversify their communications with Webinars, chatshows and product explanation videos, but realistically, the potentially applications of the system are practically limitless.

Speaking of the new hardware package, CEO of WebClip2Go Gerrit Bulten said: “WebClip2Go has always been resolution independent; we built that into the software right from Day One. But of course that theoretical ability to handle resolutions of any size needs to be matched by the realistic ability of the hardware. Fortunately, as both CPU and GPU technologies continue to evolve and the costs associated with them continue to come down, we’re now able to offer a competitively-priced setup which leverages full value from the incredible potential of the WebClip2Go program”.

He continued: “In many ways it has always felt counter-intuitive to add higher-end offerings (such as this new hardware package, or our Ultimate Chromakey extension) to our product range, since the ‘standard’ WebClip2Go system already produces such remarkable results; granting users with no AV or broadcast experience the ability to generate professional-grade video. But with these enhanced offerings, we move into territory that starts to rival broadcast-specific applications, demonstrating just how wide-reaching the potential of WebClip2Go is”.