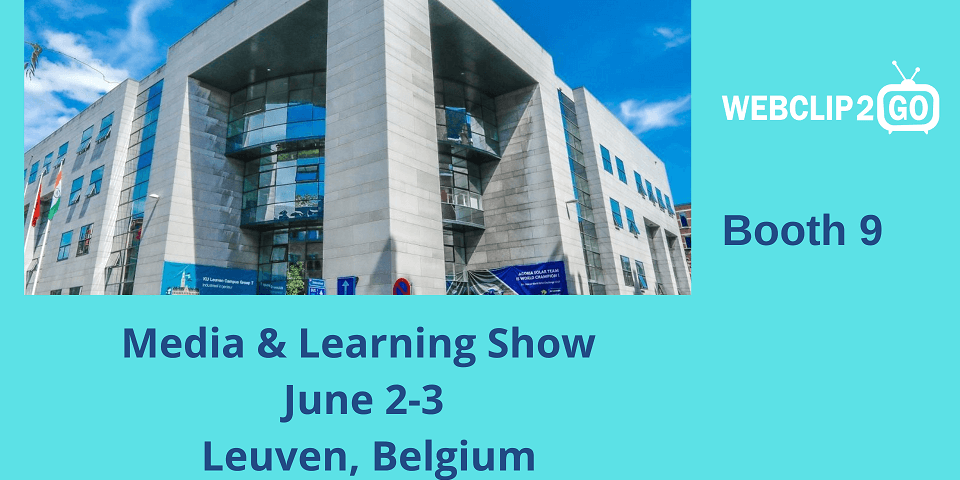 WebClip2Go, an offshoot of Dutch-based Burst Video, will be exhibiting at the Media and Learning Show in Leuven, Belgium (booth 9) on the 2nd and 3rd of June. Building on the huge success experienced at the 2019 event, they will be demonstrating particularly how their innovative approach to video production has the potential to bring significant benefit to the education sector as a result of its ‘no edit’ workflow.

The Media and Learning Show represents a conference rather than a traditional exposition, and thus represents a more intimate opportunity for educational practitioners to gather with providers of media-based educational resources in order to “share experience, discuss challenges and debate solutions, as well as to catch up with old friends and colleagues and meet new people“.

Only a limited number of companies will thus be exhibiting their products, of which WebClip2Go is one. WebClip2Go’s attendance makes particular sense given that the Media and Learning Show is co-hosted by KU Leuven, where five WebClip2Go studios have already been installed. A number of community workshops and tours of the university installation will be undertaken over the course of the two day event, with attendees then able to consult with WebClip2Go in person once they have experienced the system and its benefits first hand. WebClip2Go will also demonstrate how their newly released hardware setup has now extended the technical capabilities of the system, including the ability to accommodate up to four 4K inputs.

Launched in 2016 as spin-off of the well-established Burst Video (a broadcast solutions integrator with over 30 years of experience), WebClip2Go constitutes a full studio solution that aims to revolutionise the way in which video production can be achieved by individuals who are working without a crew or any specialist underpinning video production knowledge. With the essential aim of making video production more intuitive, less complex, and more accessible, the system is available in three different configurations: basic, live switching and PowerPoint Presentation. The latter in particular has benefits for both teachers and students, since it allows for the rapid production of videos – as quickly as 15 minutes. Users simply prepare their Powerpoint presentation – which feeds directly to the teleprompter, and then record in the studio. The output video is ready straight away.

Speaking about the benefits that the WebClip2Go system can bring to the education market, WebClip2Go’s CEO Gerrit Bulten said: “The number of universities already using the WebClip2Go system is testament to how effective it is, and the last two years have shown the importance of providing educational resources using a range of media – of which video is perhaps one of the most important. This isn’t just to do with the increasing importance of distance learning but the fact that the educational market is becoming more competitive, and increasingly learners are becoming more demanding, seeking the ability to study in their own time, at their own pace, and using a learning style that suits them: in this case, visual rather than text based“.

He continued: “More than this though, producing professional-level video content provides institutions the potential for monetization of their biggest resource: knowledge and expertise. Whilst ‘traditional‘ video production would be too time-consuming and expensive to take advantage of these resources, the simplicity and cost-effectiveness of the WebClip2Go solution opens up this potential”.

About WebClip2Go
WebClip2Go offers high quality video production tools that aim to revolutionize the way in which content is created, drive down the cost of creation, and make professional-level video production more accessible to all. As an offshoot of Burst video – broadcast and AV integration specialists for 30 years – WebClip2Go brings the innovation of a start-up with the expertise and wisdom of an established player. By fundamentally changing the workflow associated with traditional video production, and scaling back equipment needs to the point that production can be achieved with one man, one system and one camera (or multiple cameras), WebClip2Go is democratizing the process of producing professional quality video – with application across fields as diverse as education, corporate, fashion, retail. Be it a product or instructional video, informative or education content, or entertainment. No crew, no piles of gear, no fuss. Just broadcast quality video. Fast. And lots of it.